The drowning at Portreath in 1957 of an eight year-old boy on holiday from Birmingham following by the daring rescue of a local man led to the club’s formation as the result of a public meeting called by the old Camborne-Redruth Urban District Council to decide what action could be taken to prevent further tragedies.

Portreath Surf Life Saving Club was started by a dozen or so pioneers in 1958 and each summer since then its members have given up their spare time to patrol the popular holiday beach on the north Cornish coast.

The club’s first home was the ‘Signal Box’, a wooden building painted in the club colours of green and black, which stood on the seafront car park. After it was badly damaged by fire, members were provided with a workmen’s tiny corrugated iron shed as temporary accommodation.

From there the club moved to a much larger wooden chalet and this was replaced by purpose built headquarters opened in 1976. This building has just been demolished to make way for a brand new £370,000 clubhouse which will has two storeys, a balcony and the finest facilities of any surf club in the country.

Funding for this project has been provided by Sport England, the Foundation for Sports and the Arts, Kerrier Council and Portreath Improvements’ Committee.

On a summer’s evening in 1969 a group of sightseers were washed off the harbour pier by a hug wave. A nine year-old girl and her uncle were drowned. Following the tragedy, the club received the Queen’s Award for Bravery because of the heroism of club members. Interviewed at the time, David, who was then a 17 year-old student, said:

I could see a man and a girl in the water. I jumped in and got hold of the child and someone threw a rope. I held on and tried to climb up it but the waves were much too rough. Chris Jervis, Ken Pascoe and ‘Bonzo’ jumped in and between us we got her ashore. A boat was taken from the harbour to try to reach the man but the seas were too high and it nearly capsized. On the other side of the harbour, a visitor jumped in and rescued another little girl.”

This could have been a very much worse disaster. We are fortunate to have boys like this in Portreath.

The club has a record that few others can match. Its members have won bravery awards for putting their lives at risk, others have been selected for British and English teams. Many of the young people it has trained have become professional lifeguards in Cornwall and overseas. 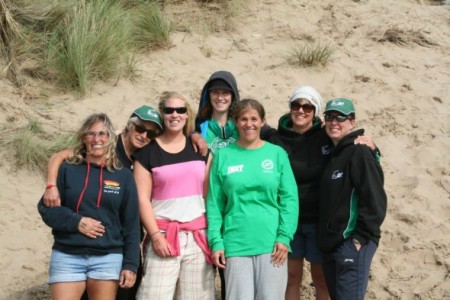